Navigation
Good evening,
It has been five months since we adopted Beau (formerly Bo), a male standard parti poodle.  He is doing great and we absolutely love him.  Beau had been with another poodle, Chance, and when we brought him home, we noticed that he was a bit down not having his friend.  We waited a few months to see if he would cheer up and though he cheered up some, we knew he needed a companion.  In August, we adopted a newfi-poo and they are now best buddies.  Beau is such a sweet boy and we couldn’t be happier with him.  Attached are some photos of Beau. 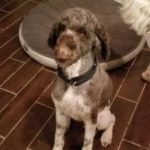 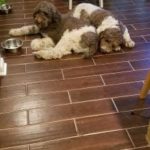